Where Your Taxes Go

Your Real Estate and Personal Property Taxes are collected for and dispersed to several political subdivisions inside and outside Cole County. In addition to the county, itself, the Cole County Collector of Revenue is statutorily responsible for collecting Real Estate and Personal Property Taxes for the State of Missouri, various municipalities within Cole County, 5 Rural Fire Districts, the Missouri River Regional Public Library and the county's 4 Public School Districts.
About Cole County
Cole County is in the central part of the State of Missouri and it is bounded on the north by the Missouri River, which separates it from Boone and Callaway counties, on the east by the Osage River, on the south by Miller County, on the west by Miller and Moniteau counties and contains 234,466 acres.

Cole County was organized November 16, 1820 and was named for Captain Stephan Cole. The county seat was located in Marion in 1822 but moved to Jefferson City in 1828. The State of Missouri also moved its seat of government to Jefferson City in 1826. The 1st Capitol Building was completed on October 1, 1826, and the Legislature convened in the building on the third Monday in November. At the time of admission of Missouri into the Union, Congress granted four sections of land for the location of the seat of government. The Constitution fixed the location of the capital upon the Missouri river, within 40 miles of the mouth of the Osage River and was located on the site of the present Governor's Mansion. 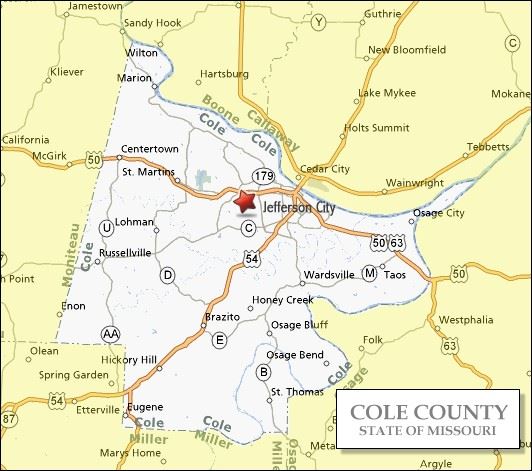